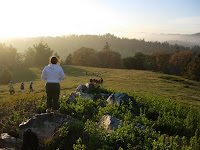 The Council meeting was a particular gift for me for two reasons. First, I learned a great deal more about the richness of our Episcopal Camps and Conference Centers which span from Hawaii to Puerto Rico to Olympia to Maine. Secondly, the council was address by Peg Smith, Executive Director of the American Camp Association. Peg comes to her work from a background in early childhood development. In her presentation, she hooked me by suggesting that the great benefit of the camping experience is to help kids be kids. Too many kids in our communities and churches have stolen childhoods through poverty, divorce, unreasonably high expectations, and busyness. The spiritual costs from this curtailed childhood are high.

Camp Stevens is a treasure for childhood in our diocese. In the woods and meadows, around campfires and on ropes courses, kids can be kids. And all of us can rediscover the rejuvenative quality of play. 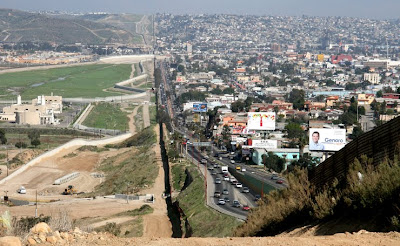 Over the last two weeks, business, civic, and political leaders have been meeting in Tijuana in a conference, Innovadora, aimed at building a hopeful and collaborative future for our regions, a future that transcends the international border that separates Tijuana from San Diego. On this side of the border, we are keenly aware of our own critical needs. Nevertheless, it is surprising to no one that Tijuana is in dire straits. Indeed, the future of these two cities are inextricably connected—thus, the international nature of the conference.

The conference planners focused on four areas: infrastructure, human capital, public safety, and cross border ties. These issues were framed in business and economic terms. However, it is good to remember that the word, "economy," is the word, "housekeeping." In reality, four focal issues of Innovadora are issues of housekeeping for the human family sharing hearth and home along a maritime desert coast. These issues are theological issues to which the Church is called to be a player.

Rowan Williams rightly suggests centering these matters of economy in his new work, Crisis and Recovery: Ethics, Economics, and Justice:

“…the question of how we think about shared wellbeing is the central one before us. Theology does not solve specific economic questions (any more than it solves specific political or scientific ones); but what it offers is a robust definition of what human wellbeing looks like and what the rationale is for human life well-lived in common.”

I am a bit haunted by the word that dangles at the end of that quote, "common." With a guarded border, there is no sense of the commons—no common space, no common economy. In our diocese, we are working more and more with partners at Dorcas House in Tijuana and with the Diocese of Western Mexico.

Maybe, just maybe, our contribution will be in creating a sense of life lived in common. Could it be that these two cities could increasingly be seen as one?

The Rt. Rev. Mark Lawrence wrote the essay, “A Conservationist among Lumberjacks,” in The Living Church, published online on October 1, 2010, which attempts to paint the Episcopal Diocese of South Carolina as a protector of the Constitution of the Episcopal Church.

It is true that there are no new plots.

What Bishop Lawrence postulates is simply a twenty-first century reprisal of the 1828 nullification crisis in which the state of South Carolina attempted to nullify federal tariffs.

Bishop Lawrence feigns great sorrow at the changing landscape of the Episcopal Church. He writes, “I have grown sad from walking among the stumps of what was once a noble old-growth Episcopalian grove in the forest of Catholic Christianity.” Donning the mantel of ecclesial conservationist, Bishop Lawrence even quotes environmentalist, Aldo Leopold, “a conservationist is one who is humbly aware that with each stroke [of the ax] he is writing his signature on the face of his land.” The bishop adds, “far too many leaders in our church have never learned this lesson.” Indeed.

All of this is prelude to his main premise that the presiding bishop is threatening the polity of the Episcopal Church. He wants you to believe that the threat is manifested in three ways: because her chancellor has retained a South Carolina attorney to represent the wider Episcopal Church’s interests should they diverge from the Diocese of South Carolina’s interests; through the Title IV revisions from the 2009 General Convention; and by the manner in which the House of Bishops has dealt with bishops who have left the Episcopal Church.

If Bishop Lawrence were simply presenting these thoughts to spur debate about his concern regarding the polity of the Episcopal Church and his perceptions of threats to the same, I could imagine he and I having a lively conversation, perhaps when we next meet at House of Bishops. He might even convince me to support changes in the canons to preserve our polity. However I suspect that that is not what Bishop Lawrence is after. His essay is rather an attempt to justify resolutions being considered this weekend at the Convention of the Diocese of South Carolina, which among other things, claims “sovereignty” of diocese. He tips his hand in his essay when he claims that “the presiding bishop and her unelected chancellor [are] intruding into diocesan independence.”

First, there is no real threat from the presiding bishop unless you attempt secession, in which case she will simply do her job of preserving the diocese from those who choose to abandon it.

The Title IV revisions, while not perfect, are an effort to shift from a disciplinary model to a pastoral model of dealing with clergy conduct issues. There is no external threat to a diocese from the presiding bishop. In fact, due process is enhanced. I would invite Bishop Lawrence and the Diocese of South Carolina to join the wider Episcopal Church in living with these canonical changes and to offer changes at future General Conventions. This is the right way to deal with perceived imperfections.

And it is rather silly to raise procedural objections to Bob Duncan’s deposition. While I believe we followed our canonical procedures properly, Duncan’s previously prepared departure to the Southern Cone immediately acted upon and announced moments after his deposition made it clear that the House made the appropriate decision.

Indeed, what’s the complaint? Bob Duncan and the House of Bishops were in perfect agreement: he was no longer a bishop in the Episcopal Church. The issue for Duncan was that his deposition gravely weakened his flimsy legal position relative to his compliance with an out of court settlement relating to Episcopal Church property. As Bishop Lawrence and the Diocese of South Carolina prepare to move forward with their own canonical changes, I fear they may be playing a similar game.

Bishop Lawrence: be at peace. Your colleagues in our House of Bishops support you in leading the Diocese of South Carolina consonant with its particular theological perspective. We grieve with you those who have left the Episcopal Church. But know this -- no one cut them out. They were not the victims of lumberjacks; they uprooted themselves. We pray that you will not do the same. It would be a regrettable repeat of history. In the end, we will wait for your next move. Please don’t fire on Fort Sumter. 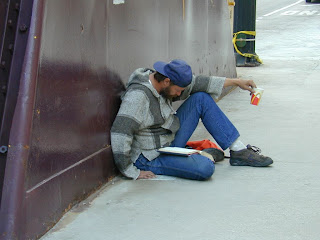 In September, a survey was taken of San Diego's homeless population. 738 individuals were surveyed. As reported in the San Diego Union Tribune (October 3, 2010), 30 percent said that they get money from recycling bottles and cans, 22 percent receive Social Security benefits, 22 percent get money from panhandling, and 18 percent receive food stamps.
A closer look at this population tells a more personal story. 80 percent have been homeless for more than a year.

Health issues are particularly vexing: 76 percent have at least one mental health issue. 55 percent have no health insurance and 37 percent have serious and potentially life-threatening health conditions. 36 percent have been violently attacked since becoming homeless and 25 percent have served our country in the military.
In our Baptismal Covenant, we promise to "seek and serve Christ in all persons loving our neighbors as ourselves."

Let me suggest that we have three things that we can do to keep this vow relative to our homeless brothers and sisters.

First, we can advocate for tax dollars to care for this population, whether temporarily homeless, homeless because of mental illness or substance abuse, or a veteran scarred by war. We need to work to change a system which discards those who are broken.

Second, we need to personally act. As a colleague of mine once said, "Always give alms." So say "hello" to the homeless you meet and if they have a cup for an offering, make an investment in human dignity.

And finally, participate in the work of our Church in collectively making a difference. You can do this by giving to Episcopal Community Services (ECS). Our Friend-to-Friend Clubhouse is a program designed to help the homeless of San Diego.

You can check out this award winning program at: http://www.ecscalifornia.org/programs/friend_to_friend.html.

Push for More, Not Less 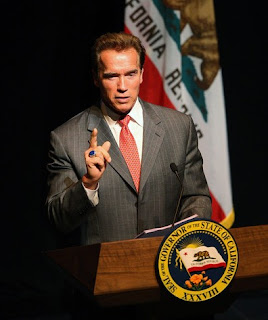 I just read that Governor Schwarzenegger and the state legislature have agreed to a deal that will close the 19 billion dollar budget gap. Details have not yet been revealed. 19 billion! That is a stunning number. To get it down to a reasonable size, that is $554 per California resident. It is less than $1.50 per day for each resident.

I point this out because my neighborhood is peppered with signs that say, “No on D,” a referendum to increase the sales tax in San Diego. After all, our city is similarly in a financial crunch. But let me stay with the big picture. Our state economy is 1.85 trillion dollars. We have more fortune 500 headquarters than any other state except Texas, which has the same number. Truth be told: there is plenty of wealth in California to pay the state’s current bills.

To end our financial crisis, however, we must recover a sense of the common good. We must decide that our neighbor’s welfare is just as important as our own. In fact our own welfare is inextricably connected to our neighbor's.

Another truth: we are not paying our own way. We are investing in a society that relies too much on the contributions of the previous generations. And we don’t invest enough to assuage the pain and suffering of those on the margins of society. We don’t invest enough in education and welfare programs.

My bet is that when the governor and the legislature reveal the details of their budget deal, they will have balanced the budget at the expense of those least likely to vote and to be heard from: the poor, the homeless, the mentally ill.

Here is what I am going to do. I am going to vote in favor of every tax increase that I can so that there will be more. I am writing my representatives to continue to push for more, not less, for those on the edge of making it—even if I have to pay more.

This is how we strive for justice and peace and respect the dignity of every human being—at least this day in California.
Posted by The Rt. Rev. James R. Mathes at 4:06 PM 1 comment: